“A vaginal birth after caesarean (VBAC) can be a real and viable birthing option for most women with previous caesarean section. There are many reasons why women prefer a VBAC rather than elective repeat caesarean section. A few reasons for a women’s preference for a VBAC are: a women’s instinctual desire to experience of a vaginal birth, opposition of surgical procedure performed without medical necessity, a safer method for both mom and baby, and faster recovery time for mom.  VBAC is associated with lower maternal mortality and overall less morbidity for mothers and babies.  Of the women who choose a planned VBAC, the success rates range from 70 to 87% (similar to general vaginal birth rates).  Many times, women are not informed of the benefits and risks between both elective repeat caesarean section and VBAC.  Many women today make a decision based on coercion of their healthcare provider leading them to elective repeat caesarean section instead of VBAC.  According to a systematic review by Nilsson et. al., information given to women was most commonly provided by doctors and related mostly to procedural matters rather than focusing on the risks and benefits linked with VBAC. Due to lack of decision aids and knowledge, women are often unable to make an informed-decision regarding birthing modes post caesarean section.”

This was the start of a research paper that was just published in the Journal of Pediatric, Maternal & Family Health – Chiropractic  …. a paper that I co-authored.  I love taking care of pregnant women, and know that if they have had a prior c-section and are interested in having a VBAC, then they really should be under chiropractic care (by a CACCP certified / Webster Technique certified chiropractor). It can make such a big difference! If you want to see the full article (with references), let me know. 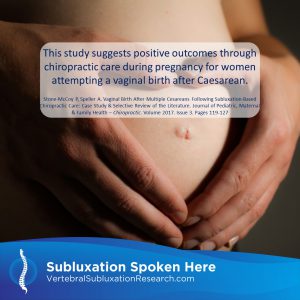 Dr. Stone has her diplomate (DACCP) in Pediatric & Prenatal care through the International Chiropractic Pediatrics Association (ICPA). She is also certified in the Webster's Technique, a specific chiropractic sacral analysis and diversified adjustment, primarily for pregnant women, and is certified animal chiropractic through both the AVCA and IVCA.
What allows you to perform well & stay healthy? De-clutter Your Nervous System

What’s in your grocery cart?

When “this” all first started happening, I got into a bit of a funk. I knew that to avoid sickness I needed to sleep, so I started sleeping 8-10 hours a night. I skipped my morning workouts. I started to stress eat. But after about two weeks I realized that I needed to get back […]

Coincidence or not? The story of the butterflies

Earlier this month I bought some caterpillars from Insect Lore so we could watch them develop into painted lady butterflies. It’s a simple easy process and a good learning experiment for my son, as he could learn about the metamorphosis of butterflies. I had the cup of caterpillars & their tent on our kitchen table […]

Last week I posted a short 15-second video on Facebook, which has since gone viral (more than 900 shares as of this writing). I’m somewhat excited about it, but I’m also not excited about it, so wanted to explain why. The video is about a dog that had lost movement in her hind limbs and […]